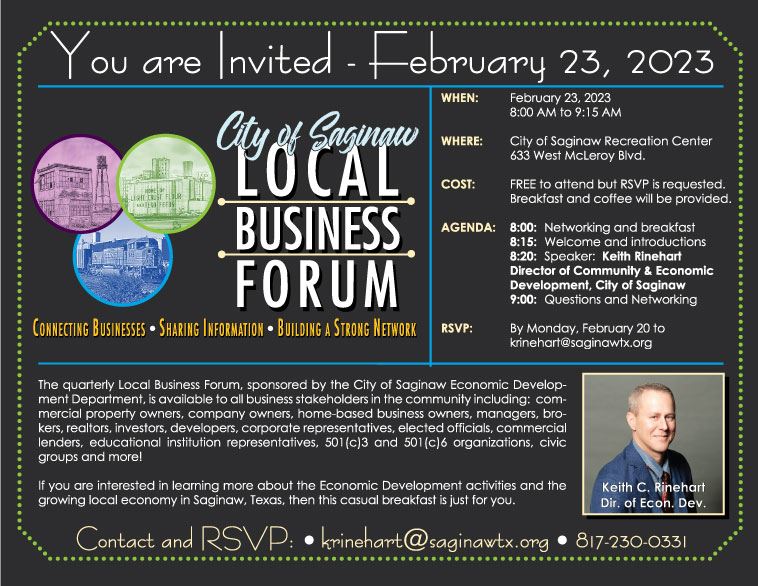 If you are interested in learning more about what the City of Saginaw local economy is about and what resources are available to grow and support entrepreneurship and employment right here at home, this casual business event is for you! These events will be held quarterly in an effort to keep the Saginaw business community apprised and involved in the future of the City.

Judge Whitley also serves as the head of emergency management for the County, a role that has proved critical during the COVID-19 pandemic. Judge Whitley has been lauded for his collaborative approach to crisis management, as he has worked closely with regional partners including cities, school districts, hospitals, service providers, non-profit organizations, and many others throughout the pandemic response.

In 2010, Judge Whitley was nationally recognized by American City and County magazine as “County Leader of the Year.”

Judge Whitley earned an accounting degree from the University of Texas at Arlington and has served in the U.S. Naval Reserve. Prior to serving in County leadership, Judge Whitley was a business owner and co-founder of the accounting firm Whitley Penn. He and his wife, Brenda, live in Hurst, where they are longtime members of First United Methodist Church Hurst. They have three children and nine grandchildren. 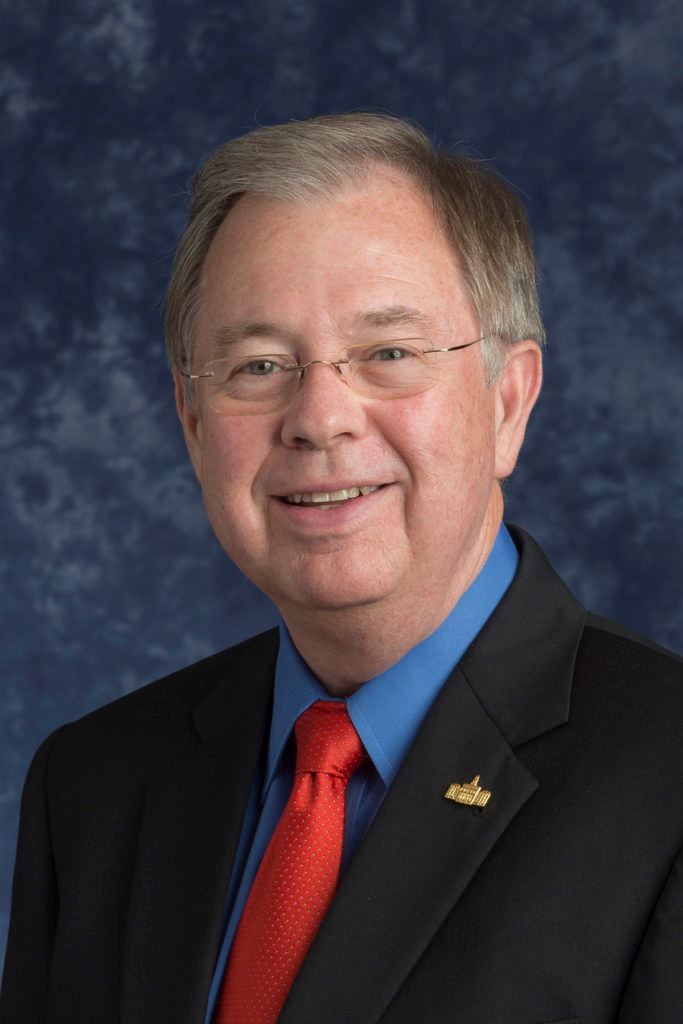 Jack Bradshaw has served as the President & CEO of the Northeast Tarrant Chamber for ten years and he loves to help businesses become more successful.  In his presentations, he brings his experience as a successful salesperson, sales director, general manager, and CEO who specializes in people development, revenue generation and creative bartering.  In past positions, he has personally sold over $4M in advertising and professional services and has trained, hired and supervised the sales activities of more than 50 other salespeople with aggregated sales of over $20 Million. 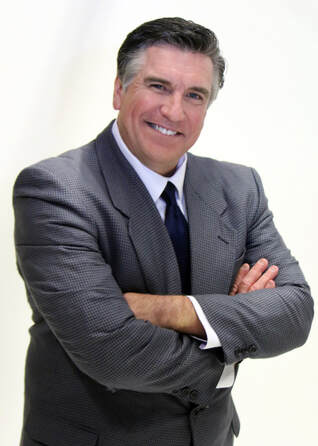 The Tarrant County College Office of Corporate Solutions & Economic Development is led by TCC Executive Vice President Shannon Bryant. Bryant is an accomplished workforce development professional who brings a strong background of working with business and industry to identify workforce solutions that enhance and sustain the local economy.

Since arriving at TCCD, Bryant has become the host of The Workforce Lens podcast and the Editor-in-Chief of The Lens, a magazine that focuses on workforce and economic development issues. 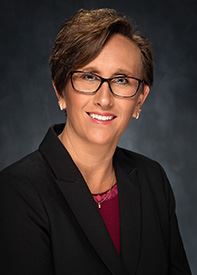 With a degree in Marketing from The Mays Business School at Texas A&M University in College Station and an MBA from Texas A&M University – Commerce, Aaron brings to The Retail Coach knowledge of the most current research on retail and marketing trends. Prior to joining The Retail Coach, Aaron was employed in marketing research and retail development where he worked on projects for some of America’s leading retailers and restaurants including FedEx, Kinkos, Sally Beauty Supply, Adidas, Concentra and the National American Association of Subway Franchises (NAASF). Mr. Farmer’s expertise touches each step of a project from the initial trade area determination to the actual recruitment of retailers. Aaron is a sought after speaker for industry organizations throughout the country. 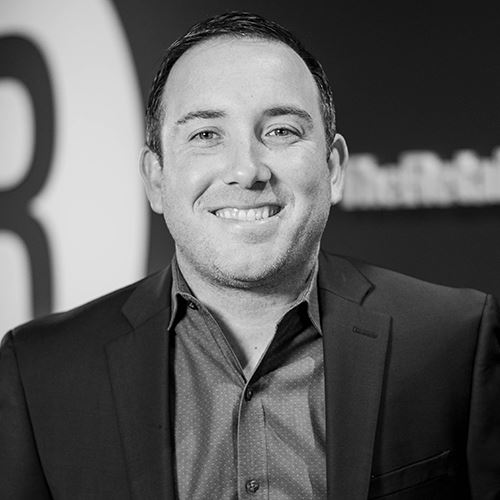 Today, the Local Business Forum Speaker was Chad Janicek of ZacTax, a North Texas consulting firm. Chad spoke about regional sales tax trends, economic development, and answered many questions that the inquisitive crowd bounced off him. You can learn more about the people behind ZacTax by listening to the ZacCast, a fun and informative podcast at: https://www.zaccast.com/

Today, the City of Saginaw hosted the first-ever, Saginaw Local Business Forum Breakfast event from 7:30 am – 8:30 am at the Saginaw Recreation Center. The Local Business Forum combined networking with important local news updates and available opportunities for Saginaw businesses in the casual, short breakfast meeting. Staff gave a State of the City (Economic Developmently speaking); Public Works and Community Development Director Rick Trice provided an update on local major construction and development projects in the city; and Assistant City Manager Dolph Johnson gave an update on the Citizen Bond Committee and the upcoming potential bond election. 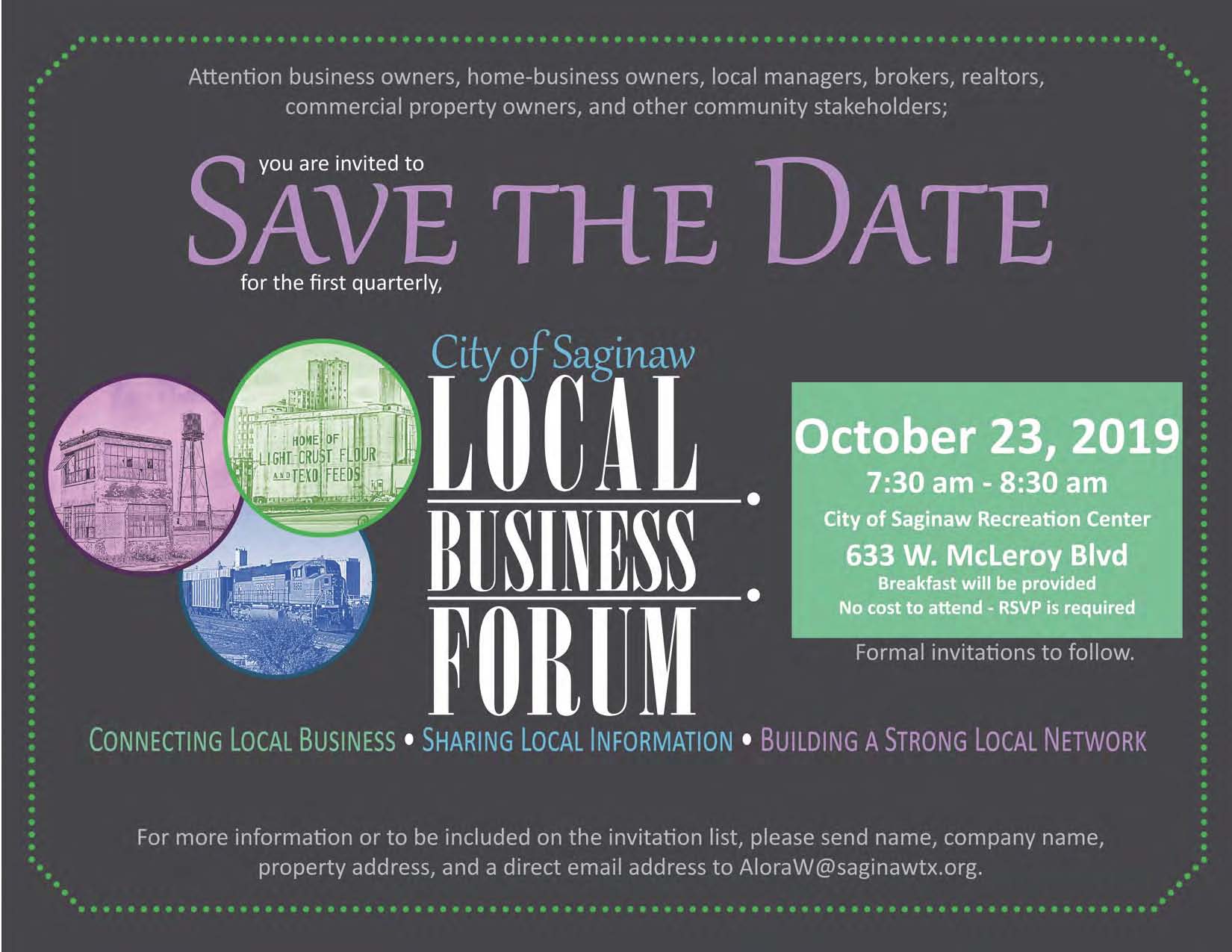